Since the rise of the Internet and it’s evolving role in journalism and news delivery, newspapers across the country have heard the same story: ad revenue and circulation is declining, staff sizes need to be cut, papers need to do more with less. However, The Washington Post has been an exception to the rule in recent years.

The Washington Post was featured in The New York Times in a recent article, highlighting its success and resurgence through online newspaper subscriptions. The two key factors are a $250 million acquisition by Amazon founder Jeff Bezos and the hiring of former Boston Globe editor-in-chief Martin Baron in 2013. In the following four years, The Washington Post has shown newspapers can sustain a profitable online presence, having hired hundreds of staffers and almost tripling its technology staff, as reported by the article. According to comScore, an American media measurement and analytics company, The Washington Post now ranks third in digital page views (811 million in April), sitting only below The New York Times and CNN among news websites. 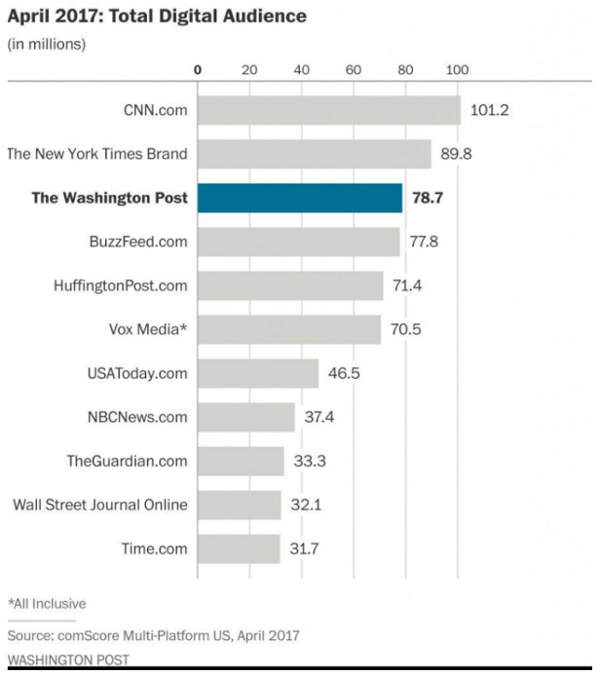 “Our digital ad revenue is in the solid nine figures,” said Jed Hartman, chief revenue officer of The Washington Post. “We’ll have our third straight year of double-digit revenue growth.”

The boom in revenue is partly thanks to the newspaper’s decision to move to a metered subscription model in June of 2013. As explained by an FAQ posted on The Washington Post’s website, all readers are allowed to read 20 online articles a month or can access unlimited content for $9.99 a month. Many other papers are following suit. According to a study published by the American Press Institute, 78 percent of U.S. newspapers with circulations over 50,000 are using a digital subscription model and 62 percent use a metered model like The Washington Post. 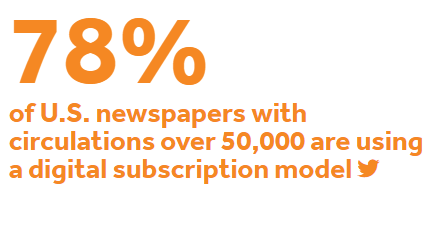 Rising digital subscriptions haven’t been an unusual trend though, with many large publications receiving boosts following the coverage of the most recent election. Year-over-year, The New York Times gained 500,000 (a 47 percent increase).

Local newspapers have taken strides to combine their print and online presence using Dirxion’s e-Edition services. These digital replicas of the print publication are a transition tool for many local newspapers, as they venture further onto the Internet and look for ways to promote their core product. Dirxion allows customers to lock their e-Editions behind a subscription login, allowing only subscribers to access the print pages. The e-Edition navigation features, such as custom table of contents, thumbnail page images and cross-reference linking, ensure that the e-Editions are easy to read and use.