Facebook and Google provide high ROI and easy-to-manage online advertising options for thousands of businesses but have put the pressure on advertising agencies of all sizes to innovate. The duopoly is now predicted to attract 60 percent of all online advertising spending in 2017, according to eMarketer.

87 percent of the $26 billion in revenue this quarter from Alphabet, Google’s parent company, came from online advertising. Facebook reached similar numbers netting $9.3 billion this quarter with 98 percent of that coming from online advertising, according to Wired. Other large tech corporations haven’t achieved such success as Twitter reportedly lost two million high-value users for advertisers and Snap’s stock went on a downward slope since going public. 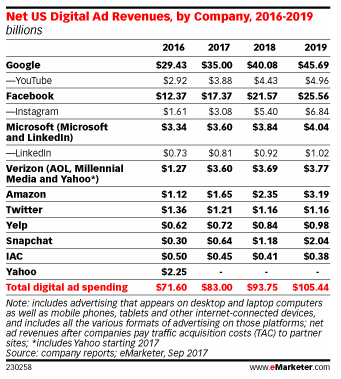 “Google and Facebook have positioned themselves at the front of this demand curve by being the ad publishers with some of the best-in-class targeting abilities in the digital ad market. With Facebook being able to provide targeting based upon consumer interests and Google capitalizing on where those consumers have been through searches, both companies ensure their lead among digital ad publishers.” –Monica Peart, eMarketer senior director of forecasting

Advertisers and ad agencies are looking for new ways to combat the duopoly, mostly by questioning current advertising practices and techniques. Many marketers are pushing for fee reduction on agency services, which would give some agencies a competitive edge. Facebook ads currently cost nearly 25 percent more than they did a year ago. But Facebook and Google both benefit from their large user base, allowing for highly-detailed analytics reports and competitive targeted ad targeting technology.

Facebook recently announced their new initiative to combat misinformation and false online advertising practices. Many online advertisers used “cloaking” procedures that would fool Facebook’s filters and algorithms and circumvent the review process. Typically when a business advertises with the social media platform, Facebook looks at the ad that the business wants to display, as well as the landing page that an ad click leads a user to. This is to ensure that the content of the ad and the landing page a user is sent to are related and not misleading.

The change is part of a multi-tiered program by Facebook to weed out misinformation, clickbait and spam in order to entice businesses to advertise on the site and create an incentive for users to remain on the platform. Pages that don’t engage in cloaking methods will see no change to their pages or their existing advertising plan, as the initiative seeks to eliminate advertisers that use cloaking methods. Scammers manipulate landing pages in a way that creates one landing page that appears legitimate to a Facebook reviewer and a separate landing page where the user will actually end up. These pages are often set up to sell diet pills, false muscle building programs and other scams. 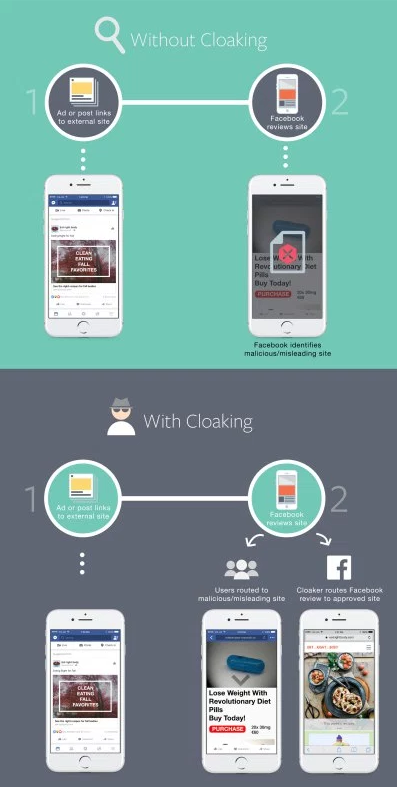 Other businesses have made similar decisions, most noticeably Facebook’s other half of the online advertising duopoly, Google. Earlier this year, the company announced they would block certain types of online advertisements from appearing on their browser Google Chrome in accordance to a study from the Coalition for Better Ads. Additionally, Google did their own investigation into third party online advertising platforms, often known as ad exchanges, and discovered global revenue wasted on fraudulent online advertising traffic might reach $16 billion by the end of 2017.

For e-commerce businesses, growing their websites through organic traffic is sustainable in the long run, cuts costs that would be used to purchase advertising space and raises traffic at a higher rate than a PPC program would. Dirxion online catalogs offer SEO guide pages that involves a process of indexing every page of the printed catalog. This practice helps boost the overall SEO of the online catalogs site, as well as increase the likelihood of someone finding a catalog page when searching a company’s brand name.

Facebook continues to develop new programs and initiatives in order to increase their standing among the newspaper community. Most recently, it announced that publishers will be allowed to have metered and premium paywalls around their Instant Articles. The Instant Articles program was introduced by Facebook in 2015 as an attempt to establish a newspaper presence on the platform and gain a commanding control of the mobile news market.

Despite the promise of the program, newspapers have remained skeptical. Even though publishers are expected to have full control over pricing, the metered paywall model is still unrefined. Publishers have long struggled with pricing models as print advertising and newspaper subscriptions revenue have declined with online advertising, a cheaper alternative, becoming more popular. In addition, the increasing amount of web users who utilize ad blocking software has already cut into publisher’s existing profits. Publications have shown the digital subscription model can be profitable, but Facebook will be withholding a cut of subscription sales. Plus, Facebook prioritizes video over text, leaving publishers less willing to hand over some of the control of their publishing power. 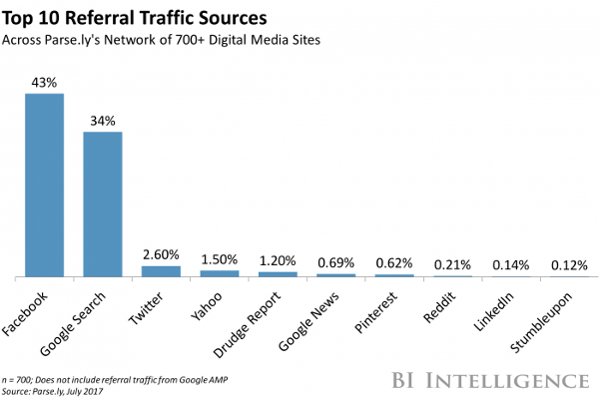 Transparency has been an issue for Facebook as well, leaving publishers questioning to what extent they’ll be able to access reader data and other vital analytics metrics. In addition, Facebook has long suffered an identity crisis as the company shifts and finds balance between its platform roots and its resemblance as a modern media empire. At its current state, Facebook Instant Articles’s barrier to entry is high, which has driven some publishers to use the service as a source of referral traffic, referring users back to the publisher’s main website. Facebook is currently the largest source of referral traffic, according to Business Insider Intelligence.

Publishers are also presented with what they consider better alternatives. For instance, Google has begun offering Accelerated Mobile Pages,in which publishers can manage fast-loading mobile web pages without having to acquire large development teams or staff members with certain specialized skill sets. Opting into Apple News has also become a popular option for many publishers, as it takes advantage of the app’s high-priority placement on iOS devices.

Newspapers and publishers of all sizes have looked to regain control over their revenue streams in order to compensate for the transition period toward a more digital-orientated publication. Local publications have also begun to support their own CMS sites as well as third-party e-Editions. The latter are digital replicas of the print product, built from PDFs and turned into an interactive format that lives on the newspaper’s website. Dirxion allows customers to lock their e-Editions behind a subscription login, allowing only subscribers to access the print pages. Widgets can also be added to e-Editions, giving Dirxion customers the tools to independently sell advertising space to businesses within their local market.

Yellow Pages and directory services have been adapted in a variety of ways in response to the rising role of the Internet in everyday life and the economy. Facebook’s newest reveal will challenge the Yellow Pages industry with upcoming adjustments to their Facebook Messenger app that will make it easier for consumers to engage with chat bots and businesses.

Facebook’s messaging feature previously lived on the native Facebook mobile application before migrating to its own separate app in 2014. With billions of messages sent a day through Facebook, the move to a separate application was framed as a way for the messaging experience to receive its own preferential treatment. The decision has paid dividends for Facebook, with Facebook Messenger recently reaching 1.2 billion users as the most popular messaging app in North America, according to SimilarWeb. 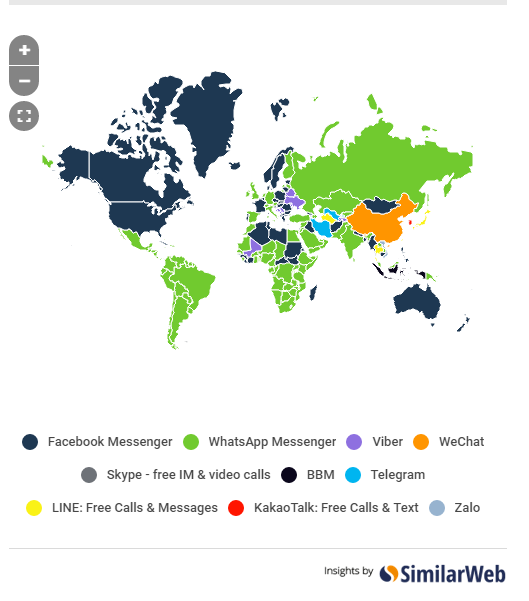 Since then, Facebook Messenger’s newest innovation comes in the form of bots, which allow customers to interact with artificial intelligence through their favorite brands and companies. Currently, Messenger has 100,000 active bots; however, only 4 percent of companies have deployed chat bots and 31 percent are currently testing them, according to Forrester Research. For the millions of businesses who have active pages on Facebook, the expectations for customer service and the role of artificial intelligence in business roles has been raised.

According to Business Insider, the newest addition to the Messenger bot software will include a new “Discover” tab, which will make it easier for consumers to find and interact with brands. Because of its large network of data, the Messenger Discover tab created a platform where users can discover local businesses through mapping locations or searching by brand. The incentive for businesses to participate is high, as Facebook has already become a central hub and chat bots can now serve as a customer service tool. Half of U.S. consumers say they prefer to use some form of messaging for customer service, according to Aspect. 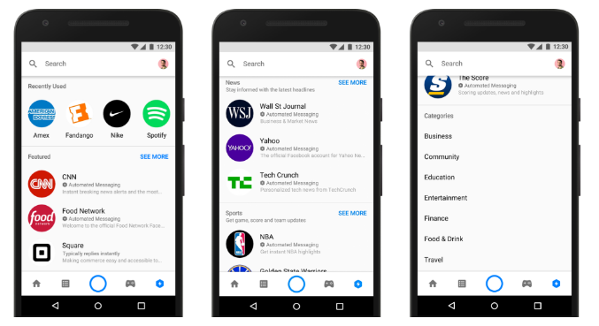 Yellow Pages and directory services have evolved to take on the digital age, as consumers have become increasingly accustomed to searching online for products and businesses. Dirxion offers print Yellow Pages services with flip-and-feel online versions as well as an Internet Yellow Pages product called Local Search. Online versions of the print Yellow Pages use PDFs of the publication and are easy to navigate while providing flexibility to print and distribution costs. With the Local Search product, Dirxion creates and provides a website for local directories to sell space on that website to local businesses to advertise on. SEO strategies can be implemented on the sites, pushing the Local Search engine up higher when customers search for products or businesses advertised on the site.

In a recent article published by Business Insider, the Interactive Advertising Bureau (IAB) reported U.S. ad industries spent a combined $72.5 billion in 2016 on online advertising as compared to $59.6 billion in 2015.  But, of that growth, 99 percent of it was attributed to Google and Facebook combined.

Last September, Facebook announced it had reached 4 million advertisers after reaching 3 million six months prior. The greater majority of Facebook’s advertisers are small- and medium-sized businesses, who find Facebook’s ad program and business pages as easy to manage as regular Facebook profiles. “We’ve worked hard to make our ads very easy to use, very simple, low cost and high ROI,” said Facebook’s Chief Operating Officer Sheryl Sandberg. Facebook first launched an ad program in 2004, where users could buy “Flyers” for approximately $10-$40 per day. Through different adjustments to their ad technology, such as lookalike audiences and regional data, Facebook has given more and more tools to businesses to reach their target audiences.

Comparatively, Google accounts for a greater share of the growth (54 percent). As is with Facebook, Google is in the business of selling attention. When users browse Google,it’s estimated roughly 10 percent of users will click on the ads and promoted links at the top of the page. Because those are paid links, these top positions are easier to obtain. The alternative is through search engine optimization (SEO), which pushes people’s posts to the top of the organic list. SEO is obtained by using branded and popular keywords that are popular among users.

Dirxion online catalogs offer a variation of ad platform services for customers through widgets. The widgets, which come in a variation of sizes and implementations, can be either integrated into an existing advertising program or the customer can sell space directly to customers without having to use an external advertising service. Dirxion online catalog products can be integrated into existing Facebook pages to allow customers to browse directly from the business page.