Recent reports from the PEW Research Center have characterized a more digitally-connected elderly population. In the U.S., a record 46 million seniors (people ages 65+) account for 15 percent of the population, expected to increase by another 7 percent by 2020. Seniors have begun to close the gap between themselves and the rest of U.S. adults in the tech world. About 67 percent of seniors have or use the Internet, compared with 90 percent of all adults and the amount of seniors who report owning a smartphone having quadrupled in the past five years. 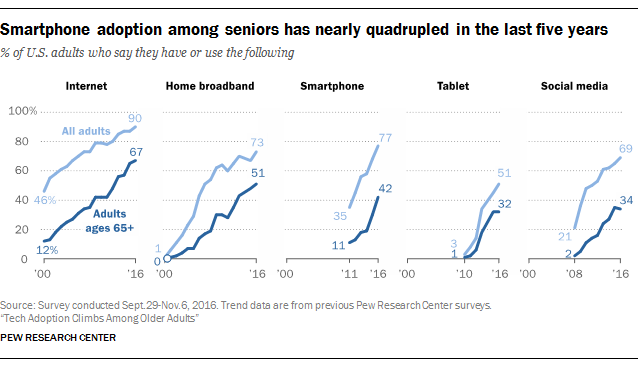 The adoption trends of seniors mirror those of the rest of the population with certain devices.Tablet ownership eclipsed e-readers, with 32 percent reported owning the former as compared with the 19 percent who own an e-reader. Within the broader population, tablet ownership has steadily increased since 2010, with 45 percent of the population reported owning a tablet (a 42 percent increase since 2010). The decline for e-readers was sharper than MP3 players, falling 13 percent since early 2014 to rest at 19 percent ownership among U.S. adults.

The more tasks that migrate online, the more the unique barriers of entry to senior citizens become apparent. The learning curve for technology is steep for seniors, who have spent the majority of their lives in an offline world. Only 26 percent of seniors feel “very confident” in their ability to use and learn their way through devices such as computers, smartphones and other electronics. But once connected, seniors have once of the highest interactivity rates, making the Internet a daily part of their lives. About 51 percent of seniors reported they use the Internet “several times a day” and 8 percent use it “almost constantly.”

“Similarly, a 2016 report from the Center found that ‘digitally ready’ Americans – meaning those who are confident in their digital skills and in their ability to find trustworthy information online – tend to be disproportionately under the age of 65.” —PEW Research Center, 2017

Dirxion online catalogs turn PDF print catalog pages into an interactive e-commerce service in a familiar format. Using Dirxion’s integration capabilities, online catalogs can live directly on an e-commerce website, within social media platforms such as Facebook and wherever else consumers interact with their favorite companies and brands. The Dirxion online catalog experience is built with user experience and ease-of-use in mind. Since the move to HTML5 years ago, Dirxion has continuously made improvements in the interface and capabilities all while keeping consumer preferences and experiences in the forefront of the design and development process.