Google and Facebook have long held a dominant share in the online advertising market. The two companies have some of the largest user bases in the world. Google now processes over 2 trillion searches per year and Facebook passed 2 billion monthly active users earlier in 2017, according to Statista.

But many ad buyers see that large user base as a disadvantage. Both companies dealt with controversy surrounding how advertisements are managed on certain sites and daughter companies. In response, many customers have adjusted their advertisement buying strategies. Many companies outside of the duopoly are seeing their revenue growing year-over-year.

Google and Facebook still account for 63 percent of all U.S. digital ad revenue. Of the remaining revenue, companies such as Microsoft and Oath claim nearly 12 and 11 percent respectively, according to eMarketer. Looking at the same piece of data, it’s apparent the majority of companies tracked by eMarketer have experienced some sort of growth in the share of online advertising revenue. For instance, Snapchat had a 0.2 percent share in 2015 which is expected to grow to 6 percent by 2019.

Amazon has also recently made a push into the online advertising market. Estimates from eMarketer predict Amazon currently holds a 7.3 percent revenue share of companies outside of the duopoly and is expected to reach 9.3 percent by 2019. 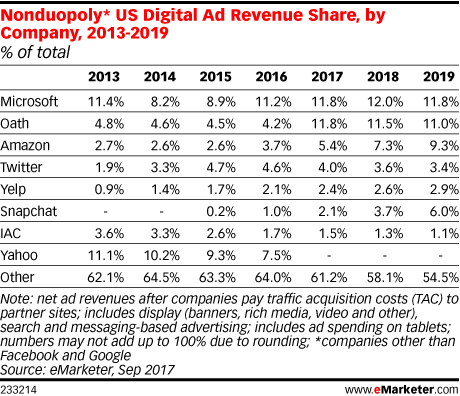 Reports from CNBC allude to Amazon making expansions on both their e-commerce searches and video services. EMarketer estimates Amazon is the 5th largest online advertiser in terms of revenue, right below Google, Facebook, Microsoft and Verizon.

Amazon currently allows businesses to promote their products in related searches but hopes to eventually give advertisers better data to allow for more precise demographic targeting. Outside of paid promotion search results, Amazon is exploring mobile advertisements, video advertising and their newly-released “Transparent Ad Marketplace” which allows customers to bid on ad space across the web.

“Amazon likes to talk about how 56 percent of product searches are coming through Amazon. It’s definitely a stat that causes advertisers to stand up.” –Diana Gordon, senior partner at Mindshare.

For e-commerce businesses, growing their websites through organic traffic is sustainable in the long-run, cuts costs that would be used to purchase advertising space and raises traffic at a higher rate than a PPC program would. Dirxion online catalogs offer SEO guide pages that involves indexing every page of the printed catalog. This practice helps boost the overall SEO of the online catalogs site. In addition, Dirxion online catalogs offer a variation of ad platform services for customers through widgets. The widgets, which come in a variation of sizes and implementations, can be either integrated into an existing advertising program or the customer can sell space directly to customers without having to use an external advertising service.