The 2017 holiday shopping season has continued to break records. Consumers began their shopping earlier than ever aided by the growing retailer trend of the pre-Black Friday sale. Despite it’s reputation as a retail-orientated shopping holiday, Black Friday brought in historic e-commerce sales.

Estimates from Adobe say consumers spent a little over $5 billion on Black Friday. On Thanksgiving Day, consumers spent $2.87 billion alone, which was up 18.3 percent from a year ago, according to the same estimates.

Cyber Monday also brought in historic numbers and showed double-digit growth from a year-over-year perspective.Consumers spent $6.59 billion, according to Bloomberg News, which showed a 17 percent increase on e-commerce spending.

M-commerce, which has quietly been growing throughout the years, played a large role in the holiday shopping narrative this season. On Black Friday, purchases made on mobile devices accounted for 37 percent of all sales which generated just under $2 billion in revenue, according to TechCrunch. Cyber Monday saw similar numbers. Revenue generated by mobile devices increased 31 percent year-over-year for $2 billion in sales, according to Digital Commerce 360.

As a whole, holiday shoppers have spent a record $89.88 billion online from Nov. 1 to Dec. 17, which is a 13 percent year-over-year growth, according to data from Adobe. Adobe originally predicted to online sales would reach $107.4 billion through Dec. 31, which is expected to be reached at the current rate of online sales. 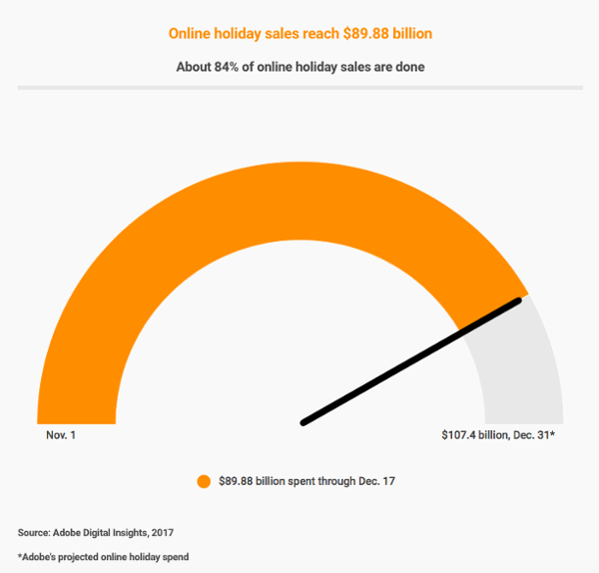 Outside of e-commerce, holiday spending in total has reached decade-high levels. American shopping intentions this holiday, on average, will top $900, according to a survey conducted by CNBC. The average is higher at a large margin than last year’s $702 and is the first time in the survey’s 12 years that the average broke $900.