Earlier this week, Google found themselves face-to-face with a $2.7 billion fine from the EU antitrust division following a seven-year investigation. The investigation was centered on Google’s search engine algorithm techniques and concluded the company “abused its market dominance” by giving an “illegal advantage” to its own shopping service.

While the fine is aimed at Google’s online shopping comparison feature, the EU’s fine adds to an ongoing list of international antitrust issues. In Brazil, Microsoft claims Google stifled competition in online advertising and the Korea Fair Trade Commission currently investigates whether Google forces Android smartphone makers in South Korea to pre-load their search engines into the devices.

“What Google has done is illegal under EU antitrust rules. It denied other companies the chance to compete on the merits and to innovate. And most importantly, it denied European consumers a genuine choice of services and the full benefits of innovation.”
—Margrethe Vestager, EU competition commissioner

Current search engine practices involve a mix of paid advertising, through Google AdSense or Google Ads, and organic search engine optimization practices (SEO). With SEO, website and e-commerce platform builders can attempt to drive traffic to their website by including content and keywords that users are currently interested in. Google AdSense and Google Ads allows companies to engage in a more “pay-to-play” market, where Google places targeted ads within their search engine results and other websites to drive traffic to a particular website.

Google refuted the claims by the EU, stating in a post on “The Keyword,” Google’s blog, that the company’s current practices of displaying shopping links in search results benefits advertisers and users alike. The company claimed revolution and innovation from product comparison sites such as Amazon has lead to a decrease in competition within that market. 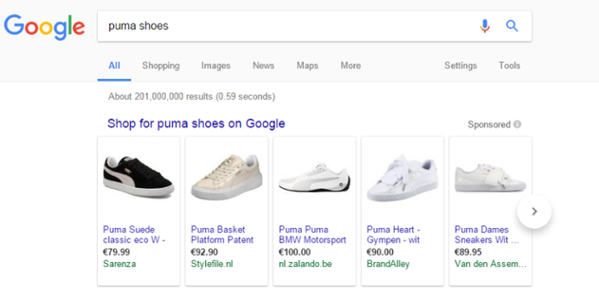 In response to the claims by the EU, industry analysts predict Google might have to change their search engine algorithms altogether or intentionally display links from the competition. A coalition of Google’s competitors formed “Focus On The User”in order to pursue lobbying efforts within the EU to put harsher conditions and restrictions on Google’s search engine and algorithm practices.

Dirxion online catalogs offer SEO guide pages that involves a process of indexing every page of the printed catalog. This practice helps boost the overall SEO of the online catalogs site, as well as increase the likelihood of someone finding a catalog page when searching for specific products.The Dirxion team keeps up with the changing landscape of Google’s search engine algorithm.