Following a released study conducted by the Coalition for Better Ads, Google announced a new feature coming to their popular browser Chrome that will block certain types of online advertisements. The study concluded that pop-up ads, flashing animated ads and auto-play ads with sound “fall beneath a threshold of consumer acceptability.”

“Tens of thousands of consumers have made their opinions clear through this robust research,” said Bob Liodice, CEO of the Association of National Advertisers. “Consumers in North America and Europe have similar views on online ad experiences they find annoying and disruptive.”

The research conducted by the Coalition for Better Ads was intended to identify which methods of online advertising push consumers to adopt third-party ad blockers to their browser. Business Insider estimates 236 million desktop devices and 380 million mobile devices have some form of an ad blocking software downloaded. 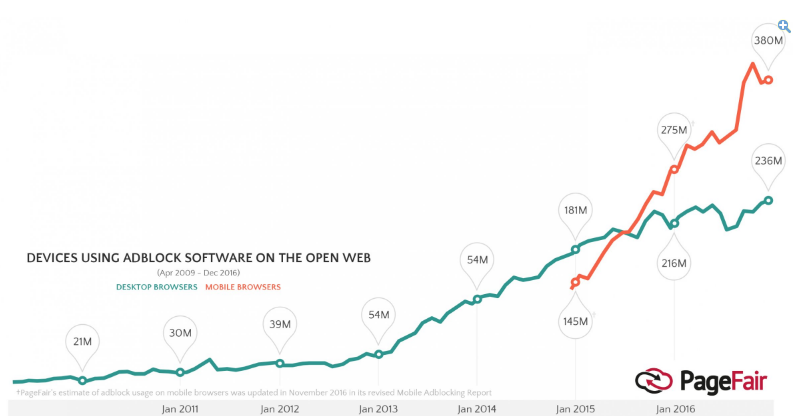 Websites have tried to combat ad blocks before by locking out content from people who have ad blocking software installed and active. According to the official AdBlock “Solutions” web page, a website usually tries to download a resource commonly used to serve an ad, and if that resource is blocked or hidden, the site detects an ad blocker is present. However, most ad block users prefer to simply move onto another site rather than “white list” a site or completely disable their software.

Alternative solutions have been varied across different sites. The Guardian displays a pop-up at the bottom of their webpages asking ad block users to donate to the site directly, whereas Forbes waits until users click on articles to lock out their content. In response, software called “Ad-blocker blockers” has surfaced, tricking websites into thinking a user doesn’t have any ad blocking software active when they actually do.

Google’s filtering tool, which is scheduled to be implemented in early 2018, will automatically block the top 12 ad formats that are deemed below the standards of the Coalition for Better Ads. Google is attempting to push third-party ad blocking software companies out of the picture who run varying degrees of white listing programs. For instance, AdBlock Plus has an “Acceptable Ad” program that allows advertisers to pay extra fees to pass through the AdBlock Plus filter. Because of Chrome’s dominance in the browser market share (59 percent on desktop computers, according to NetMarketShare), advertising companies that use any of the 12 threatened advertising forms will have to reconfigure or lose access to almost half of the potential online market.

Dirxion’s advertising widgets have typically passed online advertising standards in order to ensure they’re displayed properly. The alterations to Chrome’s rules will require attention and potential changes to the way Dirxion delivers advertisements to its interface. Consequently, this is being monitored closely by Dirxion’s development team.