Consumers have reaped the benefits of the rise of e-commerce by capitalizing on its emphasis on speed, convenience and accessibility of information. Despite that growth, retail and physical store locations remain dominant due to their legacy status and long-term prominence in the economy. However, in regions where retail locations have yet to take hold, the effects and benefits of e-commerce reach a greater magnitude. The accessibility and reach of modern e-commerce systems make these regions accessible to businesses of all sizes, not just the largest players in the market.

India has become one of the most sought-after markets to capitalize on, with some of the largest international e-commerce businesses competing for market share. As one of the fastest growing e-commerce markets in the world, India has seen an influx of e-commerce activity as Internet access and smartphone ownership grow in recent years. According to Statista, as early as 2015, only 26 percent of the Indian population had access to the Internet; however, that’s 10 times larger than it was nearly a decade ago. That trend is expected to continue, as Forrester predicts India’s compound annual growth rate will be over 30 percent until 2021. 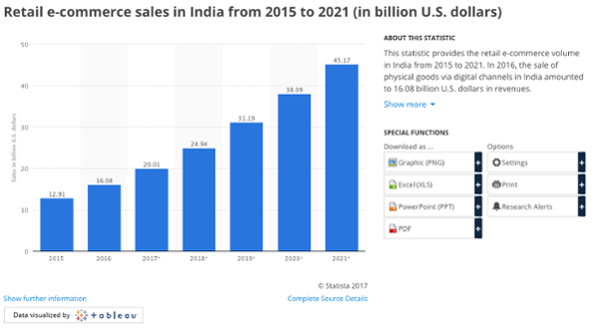 E-commerce businesses have also begun to take stake in adjusting the retail experience to integrate online and offline logistics and data along a single chain. Chinese B2B e-commerce business Alibaba, who accounts for a tenth of all Chinese retail sales and 75 percent of online sales, has begun investing in unused retail space in Shanghai and has taken stake in other retail companies to provide big data capabilities to legacy retailers.

In many isolated incidences, smaller economies can outgrow larger economies in e-commerce. Chinese cities are categorized into tiers one to four, based on GDP, government structure and population data. E-commerce penetration for Tier 1 and 2 cities amounts to 89 percent as compared to Tier 3 and 4 cities, which is 62 percent. E-commerce businesses have been expanding their logistical and infrastructure capabilities in order to expand to these more rural markets.

“The online shopper base in Tier 3 and 4 cities is 257 million, a population number that is larger than that of almost all countries in the world (except India, China as a whole, and the United States). That is serious market potential.” — Sara Hsu, Forbes, 2016