The mobile applications market recently recorded one of their largest holiday seasons in history. On Christmas Day alone, consumers globally spent $196 million on apps, in-app purchases and subscriptions in the Google Play and iTunes stores combined, according to Sensor Data. While the report excludes Android information from China, the data represents a 12.3 percent increase from the year before.

The holiday season was especially profitable for Apple. Consumers spent a total of $890 million in the App Store in a week spanning from Christmas Eve to New Years Day, according to an official press release. New Years Day was the most profitable day in the history of the App Store. Consumers spending roughly $300 million in that single day and breaking the previous record’s $240 million set the previous year.

Even so, Apple’s devices make up a smaller percentage of the mobile market when compared to Android devices. As of July 2017, 18.7 percent of all mobile devices globally run on iOS as compared to Android’s 73.39 percent. The gap closes, however, with respects to the amount of apps available on their respective stores. As of Jan. 2018, the App Store has roughly 2.2 million apps available to download whereas Google Play has 3.5 million, according to Statista.

Worldwide, app downloads and smartphone usage are at an all-time high. Sense Tower estimates 92 billion apps across the Google Play and App Store were downloaded in 2017, a 13.5 percent increase from 2016. The smartphone market has been consistently expanding with a predicted 2.87 billion users by 2020. 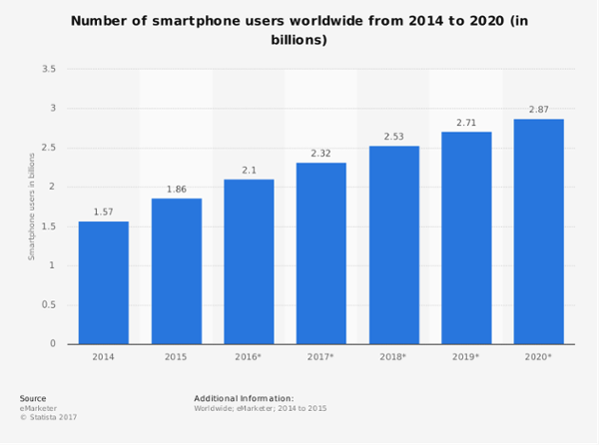 Consumer confidence has increased with new adjustments to mobile application monitoring and quality control in both stores. Dirxion offers app development for both the Google Play and iTunes stores. Within the apps, customers are able to view a business’s online catalogs or download them for offline viewing. The catalogs are interactive and optimized with HTML5. Dirxion apps that include keywords such as “online catalog” and outline the app’s performance capabilities have historically been better received by consumers. Companies without a dedicated e-commerce mobile app benefit from an audience built from a Dirxion online catalog app. The apps can give companies a direct avenue to a captive audience of customers via push notifications that can alert them of new catalog releases, upcoming sales and other pertinent company news.