Adobe announced recently that it has officially initiated plans to end-of-life Adobe Flash, which means they will no longer update or distribute the Flash Player by 2020. Included in the brief, Adobe made mention to other open source languages, such as HTML5, and encouraged developers and content creators to migrate over to these industry standards. Apple, Facebook, Google, Microsoft and Mozilla all made announcements following the release of the news, who outlined how the Flash withdrawal would operate on their platforms and offered developers resources to ease the transition into other open source languages.

Some of the biggest players on the Internet have continued their anti-Adobe Flash campaign, taking additional measures and continuing on certain plans to make HTML5 the industry standard. Companies such as Facebook, Apple and Google have all taken stands against Flash in attempts to persuade others toward embracing HTML5.

By October of this year, Google will officially de-emphasize Adobe Flash in favor of HTML5, as announced in Google’s blog The Keyword. The current system asks user permission on running Flash the first time a user enters a website that’s either built on Flash or has Flash-supported features. As October approaches though, Google will require permission to run Flash on every instance a user enters that site. Other browsers such as Windows Explorer and Mozilla Firefox have begun following suit, taking measures to phase out Adobe Flash for a more HTML5-friendly Internet. 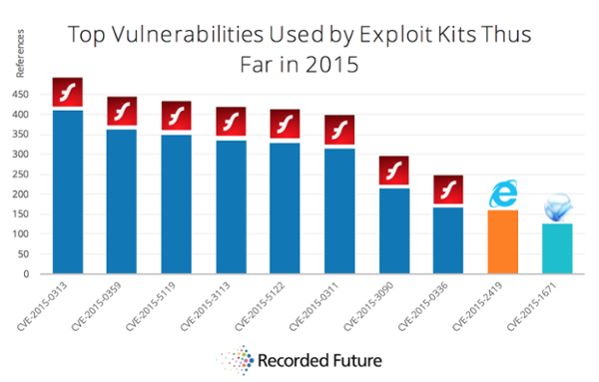 Adobe Flash’s security concerns have been one of the most referenced reasons for its fall from Internet favor. In 2015, Adobe Flash accounted for eight of the top 10 most referenced vulnerabilities used by exploit kits, according to Recorded Future. Steve Jobs took a stand against Adobe Flash in April of 2010, shortly before the iPhone 4 was released. Jobs cited security concerns and restricted performance capabilities when Apple devices operated on Flash, echoed by industry reviews. Kyle Wagner of Gizmodo says, “Adobe was never really able to smooth over performance, battery and security issues.”

“Symantec recently highlighted Flash for having one of the worst security records in 2009. We also know first hand that Flash is the number one reason Macs crash. We have been working with Adobe to fix these problems, but they have persisted for several years now. We don’t want to reduce the reliability and security of our iPhones, iPods and iPads by adding Flash.” —Steve Jobs, 2010

Consumers are becoming accustomed to an HTML5-optimized viewing experience and often react poorly to websites or features that use Flash’s clunkier, poorly-optimized technology. Most recently, streaming platform Filmstruck used a Flash player for its movies and users have reported both quality issues and issues white listing the feature through Flash-blocking software.

Dirxion online catalogs first shifted away from Flash five years ago and opted for a more reliable product with HTML5. Today, the online catalog is one of Dirxion’s strongest platforms, using HTML5, Javascript and CSS to provide a custom design for the user’s shopping experience.